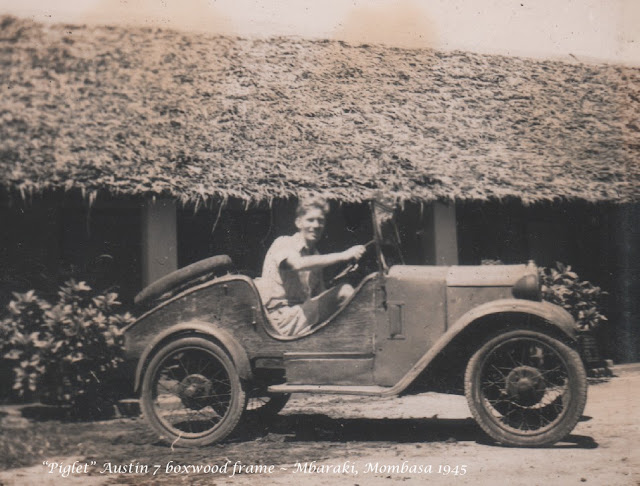 After my parents married they moved into a bungalow at Mbaraki, not too far from the Moorings Hotel close to Liwatoni. Mombasa in those days was blessed with very little traffic and father always used his bicycle. My parents often joked about “Piglet” which somebody offloaded on him. It resulted in father driving it everywhere much to his enjoyment. A lot of Austin export cars had a box end construction ~ not sure why, could have been for the military? 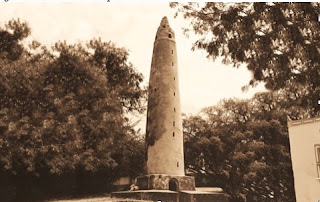 The bungalow was in the shadow of Mbaraki Pillar. Almost 50 feet tall, the 300-year-old pillar stands about 50ft tall and is believed to have been an early form of lighthouse although close by is a slightly older mosque with which it may have been associated.

It is the second oldest monument after Fort Jesus. Made of coral stone and still in its original form, the pillar leans at a slight angle like the leaning tower of Pisa.
Posted by Jon at 4:34 PM

Email ThisBlogThis!Share to TwitterShare to FacebookShare to Pinterest
Labels: Places

This page is an outline page for a proposed blog which will allow ex-pupils of Mombasa European Primary School to post their recollections and photographs.
What we are looking for is short pieces of writing which are about memories of MEPS and Mombasa friends, places, events....
Ideally, the writing should not extend beyond about 400 words. Ideally, too, it should be accompanied by a photo or two - but this is not essential. As an example, the post The Arab Chest is 300 words and the photos are around 500kb.
The blog is experimental until we have an idea of the amount of interest. Comments would be appreciated - contact either Tony Chetham tonychetham@gmail.com, or Jon Haylett at jehaylett@btinternet.com.
If you feel you'd like to contribute, contact Jon. 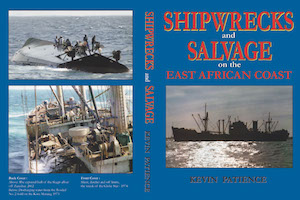 If you have something to sell which might interest MEPS Memories readers, we're happy to advertise.... free. Just let Jon have the material - see Kevin's advert above - jehaylett@btinternet.com